Feast of Our Lady of Livra Febres, Consua Verna, Goa 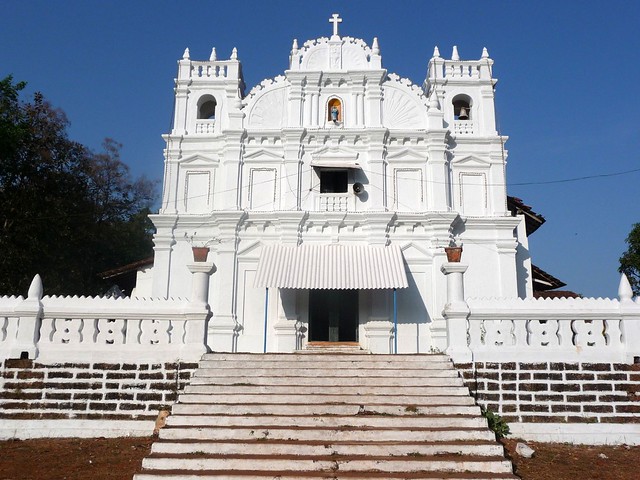 Feast of Our Lady of Livra Febres celebrated today at Consua, Verna Goa
22nd January, 2012
I remember going to this feast, on foot, all by myself, covering a distance of
about 7-8kms.  I was just about 12 years. I almost lost midway...
See, I was into adventure or discovery trips even at tender age.

Saibinnichem orasao (Hymn, can be heard in the video in the end
soon after the procession/blessing) 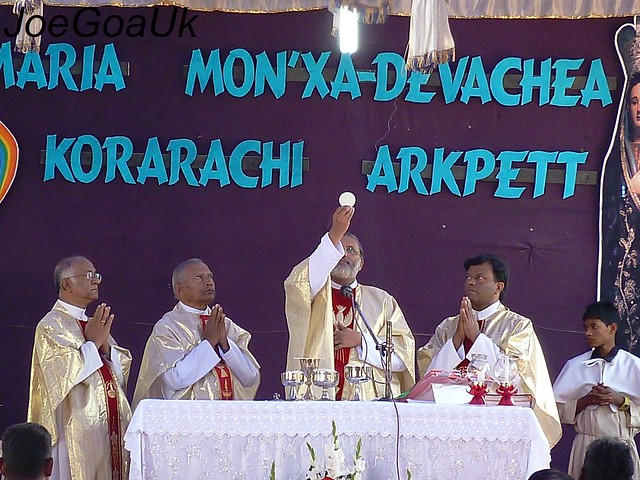 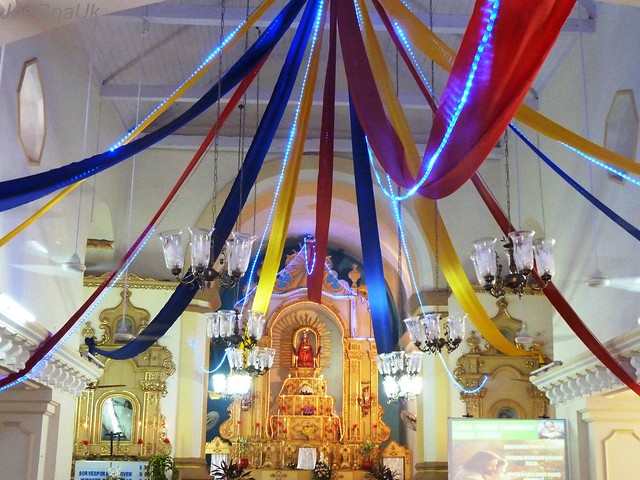 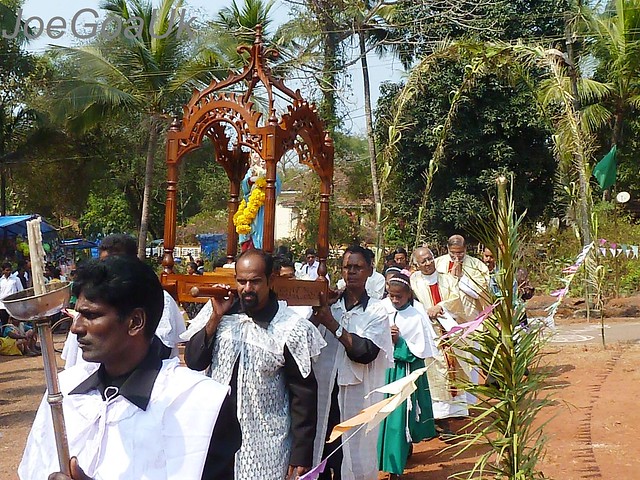 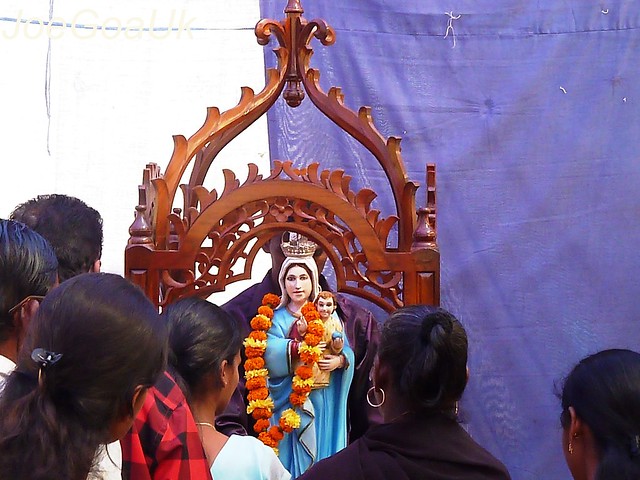 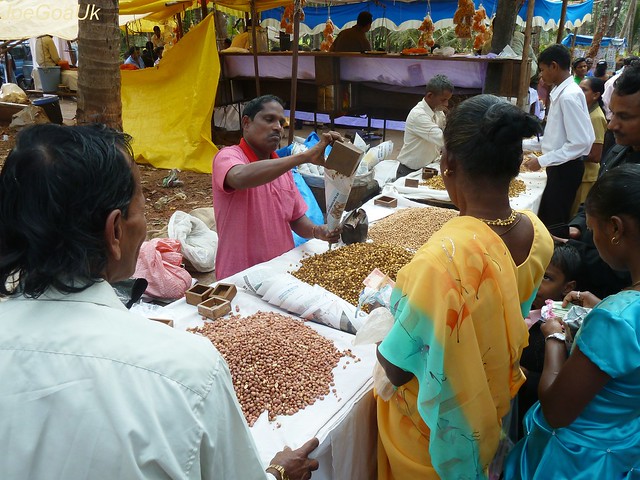 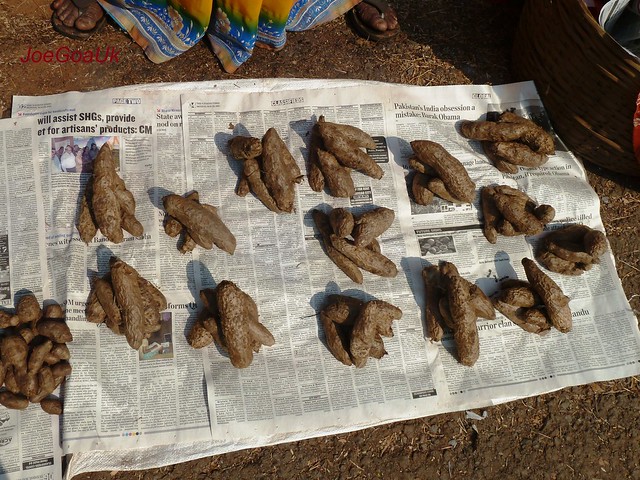 Calangute beach: The Queen of all the Goan beaches 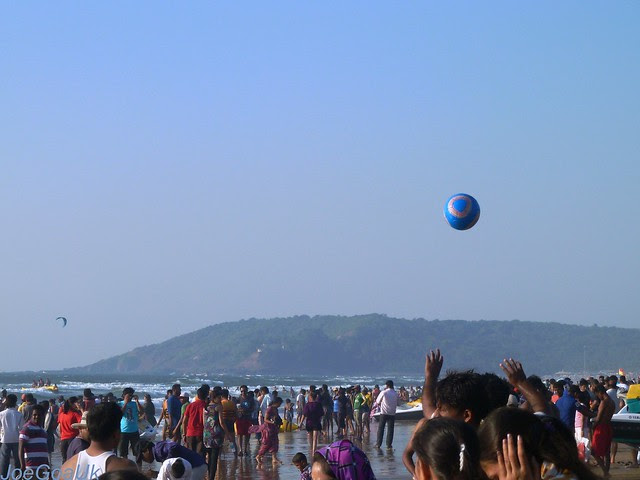 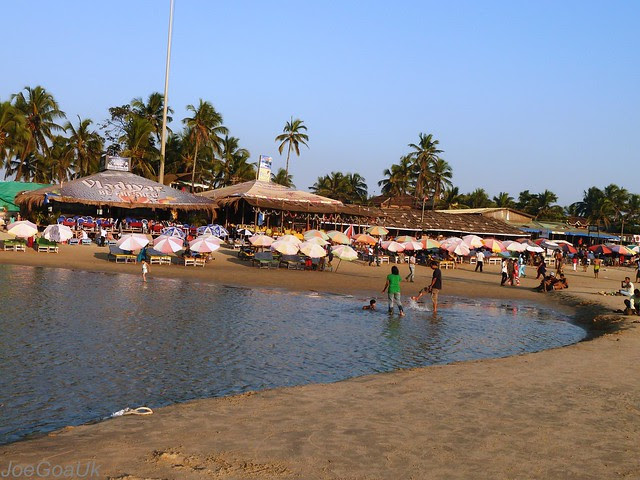 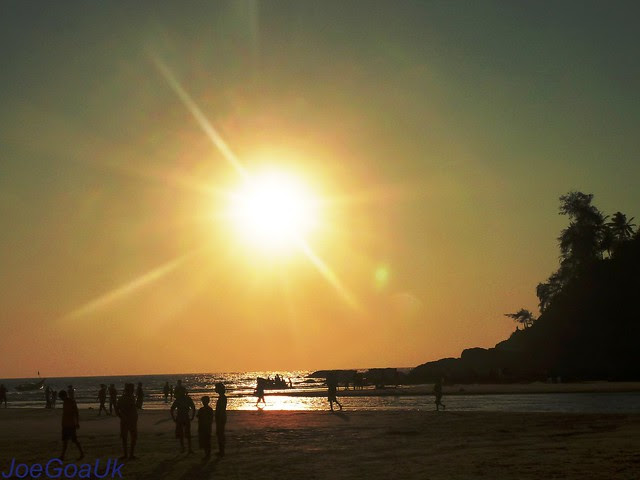 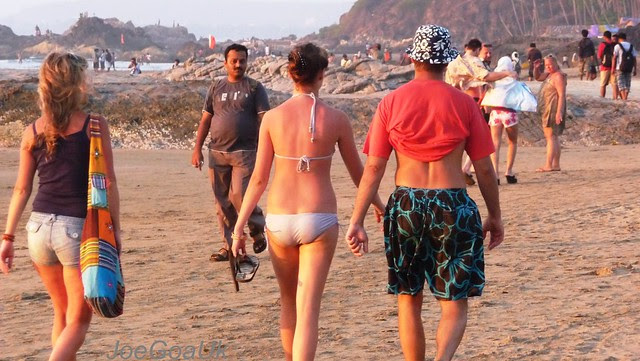 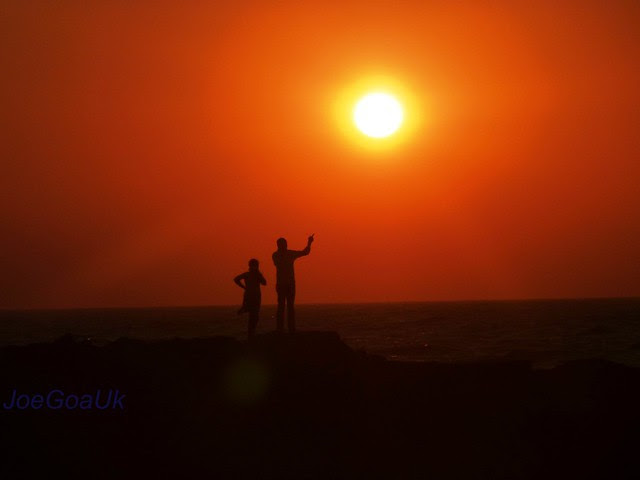 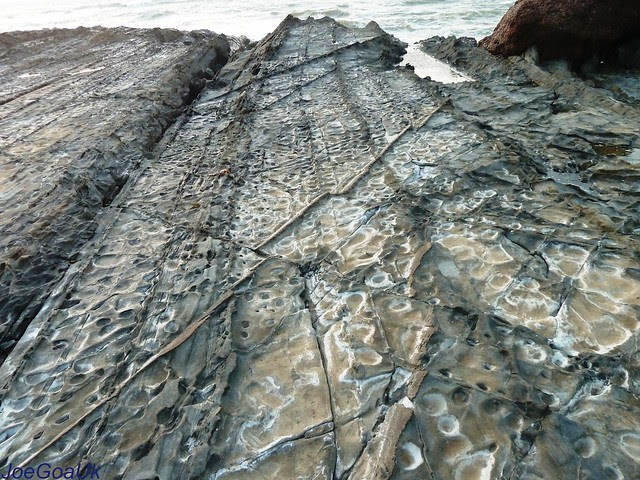 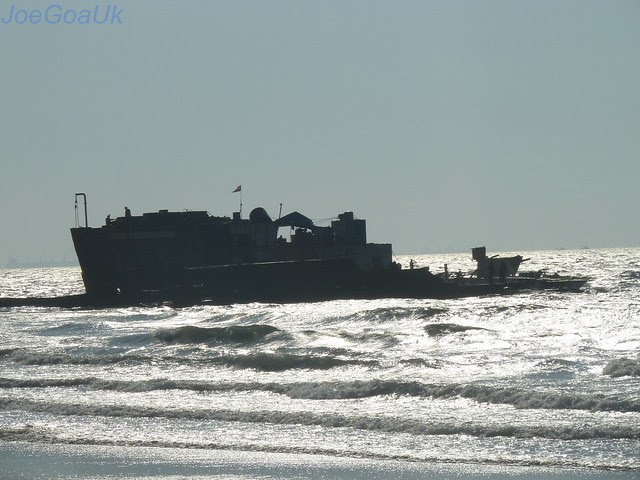 Grounded in June 2000, checked here how it looked like then.
http://www.youtube.com/watch?v=QGEQZ7Z7i2U

http://www.youtube.com/watch?v=8or4M0Yc1tQ
Posted by JoeGoaUk at 05:20 No comments: Links to this post 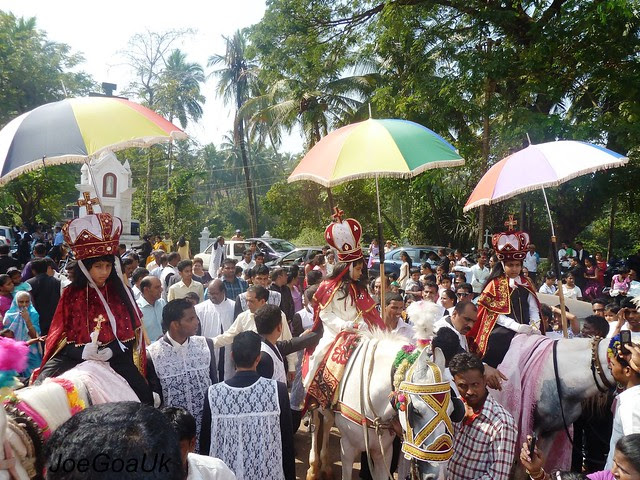 3 little kings from Cansaulim, Arossim and Cuelim.
However, in the end, when all 3 kings go their different ways home at Cansaulim Church, one went to his home at Velsao.

The three kings go up on the hillock in three different traditional pathways 'Paz' but at the end of the feast mass, they descend via one common way (separate 'paz') see pic. 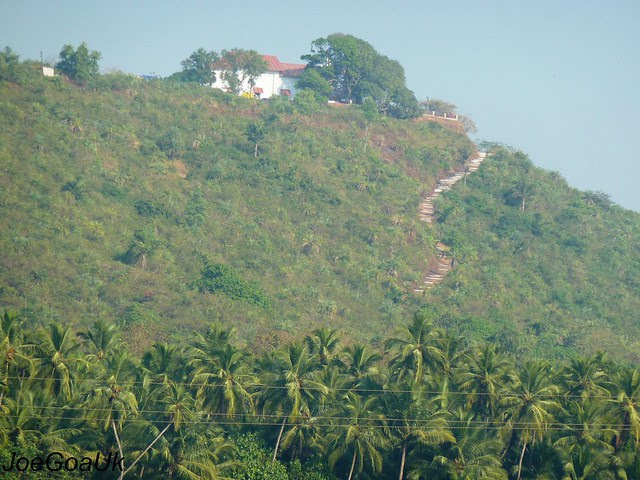 Once at the foot of the hill, they make their traditional halts or stations where the people get a chance to crown themselves etc. 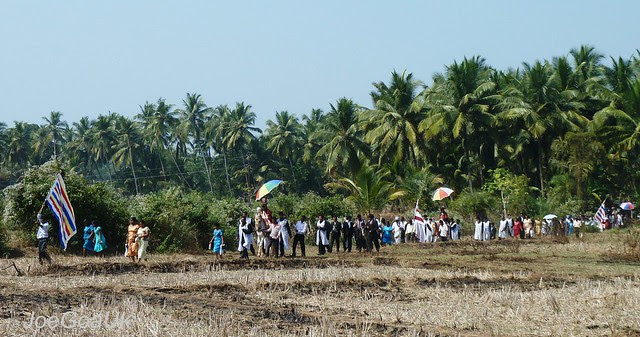 There are about 8-9 such stations, last one being at the Cansaulim Church (with all 3 king together).
From here all kings go different way to their respective homes. The king of Arossim may reach home around 3pm
They all leave their homes around 8 am I suppose, to make it on time at the hillock for 10 o'clock feast mass. Leave there at around 12pm (after mass) and the journey back home takes upto 3 hours 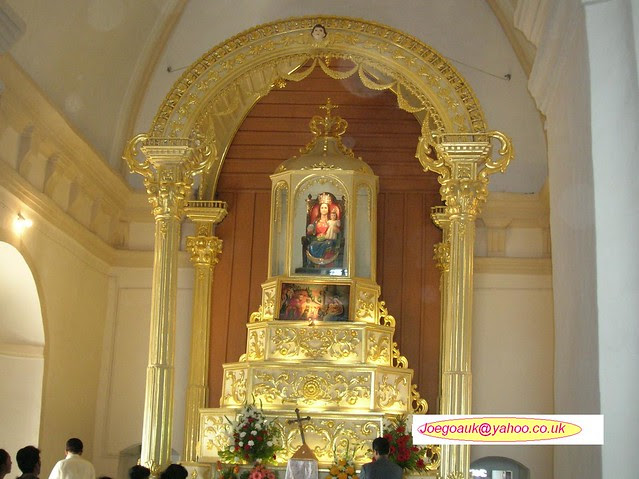 Traditional 'Paz' for descending
(There are 3 other for climbing)


Video: 3 Kings Feast - Kings journey through field etc
Once the kings leave the chapel (after feast mass) say around 12 noon, takes them upto another 3 hours to reach home.
This is because the king and their entourage follow the traditional trail or way which is through fields etc.Besides, there are about 9 traditional stations or halts where people gather to be crowned (see video / Pic).
About 3 such halts around the foothill followed by Xendo (fields), then in front of T. B Cunha ancestors’ house


(There are 3 large houses in one row) locals  traditionally call them ‘Goemkars’
Traditionally, Pez or Kanji was served here.
The next station would be at Albert Cunha House, Cuelim.
I saw Shri Albert Cunha (11.12-12.40) after long time, last several years, he usually stayed indoors.
He was very popular at Churches, including Pilar with his white suit safari. Very good friend of mine. He was also active member of MGP (Lion) I think.


Immediately, next halt would be between former Regidor and Dr. Marconi House
followed by Barca where the kings come down and take a brief rest

Last time we see 3 kings together is at the Church square, here all 3 lined up facing the Church, Laudate is sung and the 3 large flags (bonderam) are waved from right to left see video (19.44)
From here the kings will go different ways, usually one goes backward (Cuelim) and
the other two takes different route at Cansaulim market. This year, we saw one going to Velsao taking the route from behind the Cemetery.(22.25)


Another intesting thing I have noted is the band which is usually a two man band. I think we called it ‘Chermel’ or ‘Chermelam’ see 15.18.
A man would play a drum (Dhol) and play ‘cornet’ same time. Another fellow played ‘rengtteng’.
Chermelam (?) was playing at 5am at the chapel, along with ‘fozne’ which served a sort of a wake up call to the nearby villagers
who regularly attended the novena mass. People left their homes around 5.30am so as to arrive up there in time for mass at 6.
Chermelam playing could be heard all over Velsao and Cansaulim.

Brass band:
Each king will have his own band throughout the journey and they would play in turns.
One of the 3 bands, was the above 'Chermelam'.


All cute little kings can be seen more closely at 20.25
King's crown.
It was the most expensive item of the occasion which was also kept as a souvenir.
I remember, such crown costing Rs.300 in late 70's
All other kings dresses, colourful umbrellas, bonderam etc I guess it is a church property.
Hiring of Horses from neigbouring districts such as from Belgaum was the next expesive thing.
Traditonally, buffaloes were used instead of horses, we were told.


3. That on the night of the Feast i.e. Jan 6.. No one stays at the chapel/hill.
It seems there is a long procession with fire torches after midnight and who ever stays up there get sucked into to aerial procession. Where as some say who ever stays there turns into a rock.
As a matter of fact, I do know that the above No. 3 is not true. As then parish priest Fr. Alban Fernandes stayed there on the night of the feast along with my friend and two others. Nothing happened to them and they were back home safe next day . This was in 1980s.
4. That there exist a tunnel below the chapel and that a priest went through it along with a dog and that dog returns and the priest didn’t . However, same story associated with every other tunnels near the churches e.g. Siridao, Raitura, etc etc
Remeth sokol Zor/ Spring
Once it was very popular, look at it's state now.
There are houses now in the close proximity. 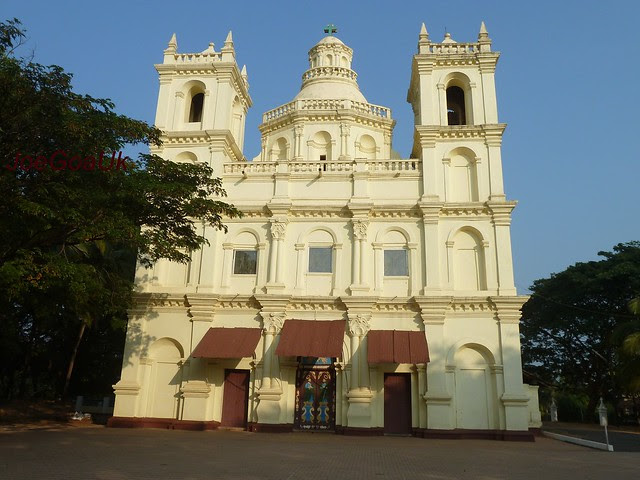 We visited St. Estevao on 3rd January 2012 for Xmas Crib.

and I did not know there was a ferry point named Daugin-Tolto
and I did not know there existed a fort in St. Estevao.
I did visit the hillock for The Christ the King Shrine in mid 80s but don't really remember seeing a fort there. No, the fort wasn't built in last 25 years, infact, it was there long before Portuguese came to Goa..
..and while I was at it (on the net), I just discovered there exist a village named Gaundalim near Old Goa with it's own Church (Sao Braz)

So small is our Goa and I think I have not even explored 40% of it so far and I don't think I would ever be able to make it to 50% despite having all the time and money at my disposal.
Ok, over to..
Santo Estêvão (Jua)


Distance between the two jetties
http://www.flickr.com/photos/joegoauk49/6637553583/in/photostream/ 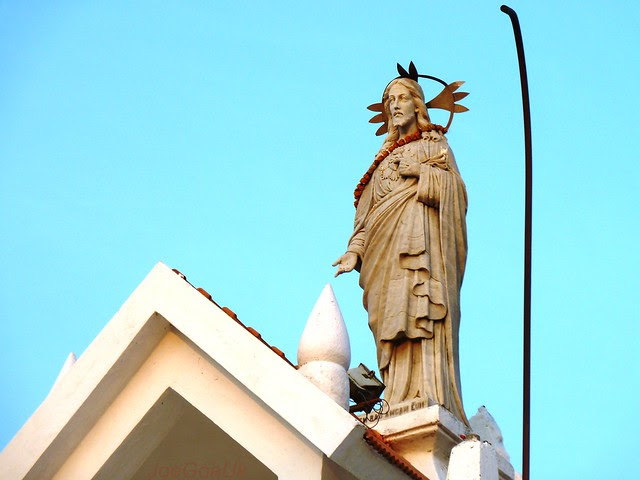 The Statue of Jesus was brought from Rome in 1926 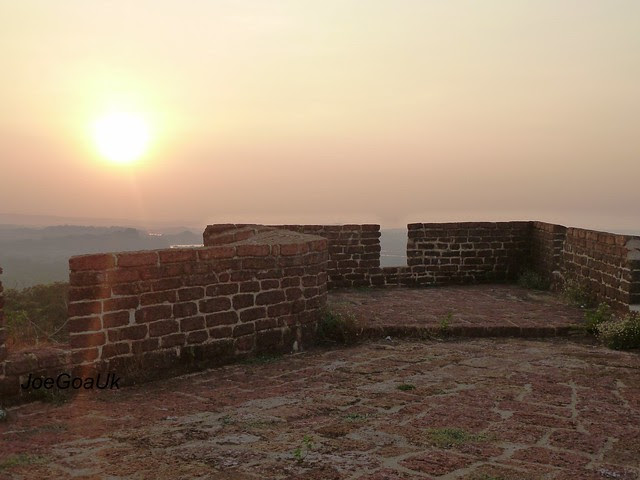 http://www.youtube.com/watch?v=eo8qDPEsh30
Posted by JoeGoaUk at 05:32 2 comments: Links to this post