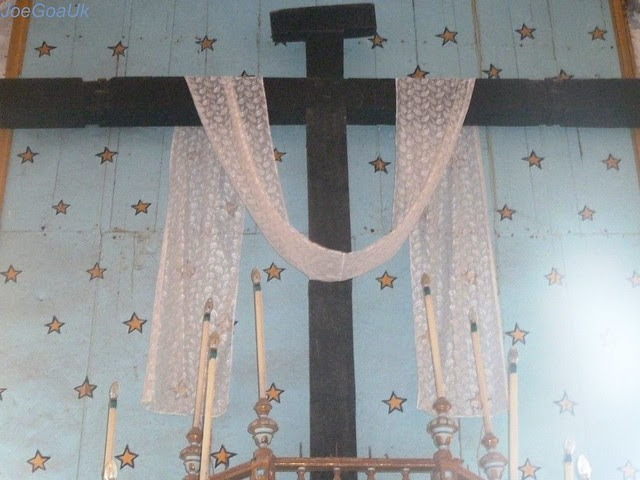 
(Usually the feast is celebrated at the Boa Vista Hillock, near bypass road, the church there is now under renovation)


From childhood, we have been hearing of this Miraculous Cross erected by shepherds (Gorvam Bhurge)? which started growing on the hillock and upon which Jesus Christ was appeared – More of it was explained by  Fr. Eremito in his homily (refer Video clip coming soon) 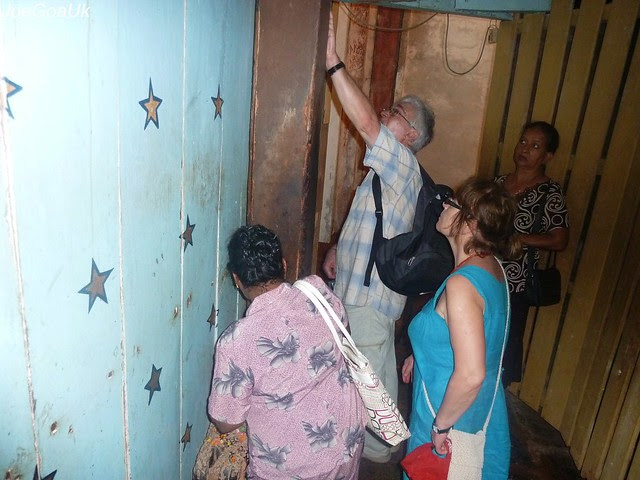 
Why ‘Pez’ ?
Pez was the main meal of Bl. Joseph Vaz and also he took care of his patients at the time of epidemic with pez and prayers. 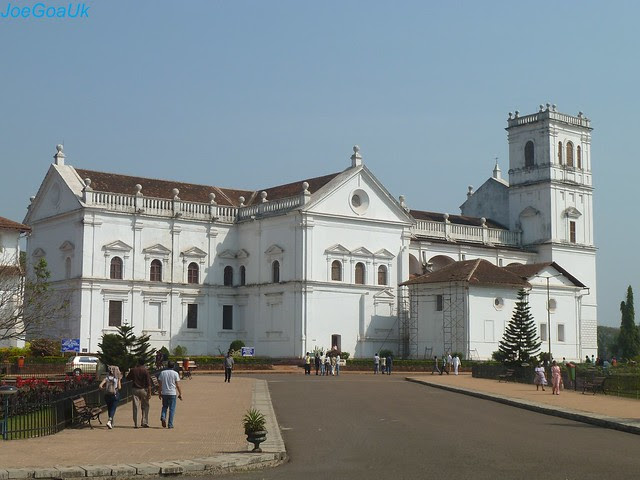 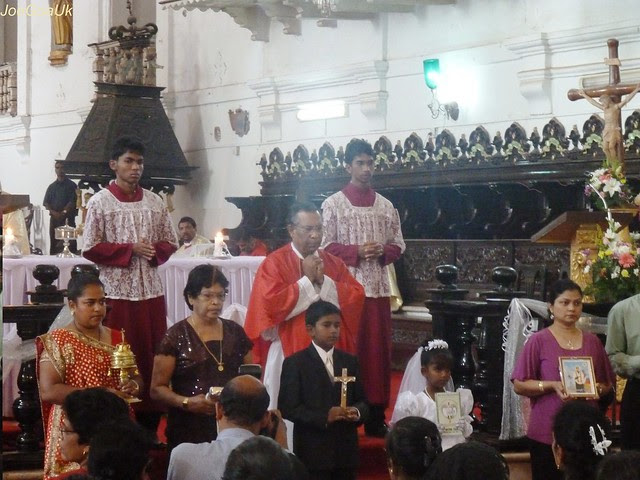 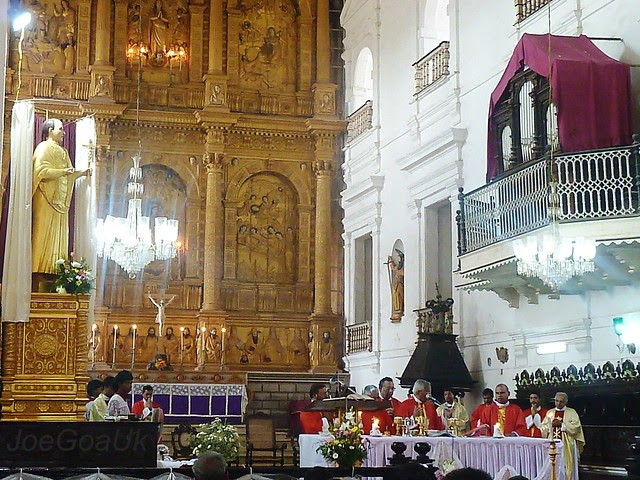 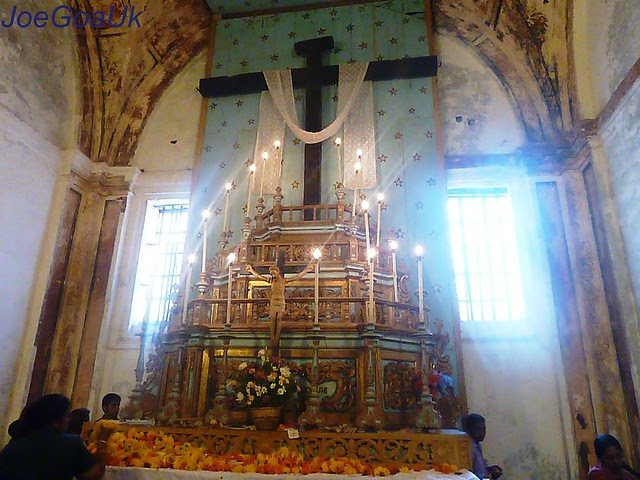 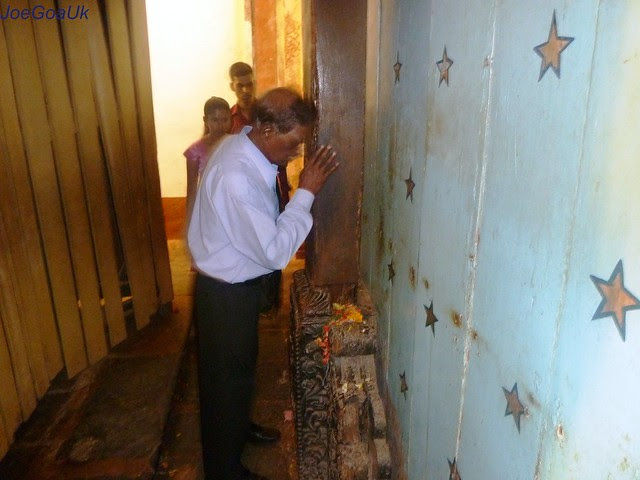 below the cross or behind the altar 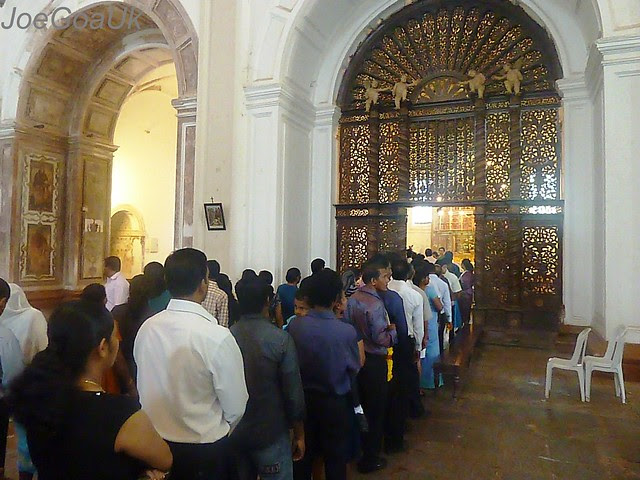 Lined up for Umao or Veneration


Inscription on the wall 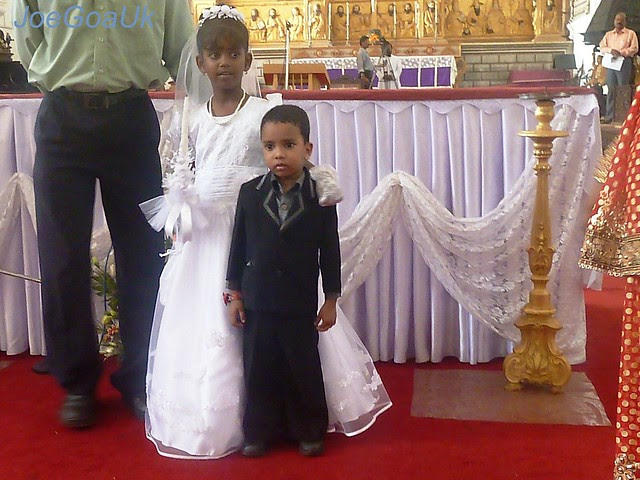 
Silver Bell, no It’s Golden Bell and there are 4 more bells next to it when ringing it gives melodious tone do re me fa sol check for video dtd 14.1.15

A view of St, Augustine Church Tower
With Santa Monica

http://www.youtube.com/watch?v=rlyRzUqyBPQ
Posted by JoeGoaUk at 18:03 No comments: Links to this post 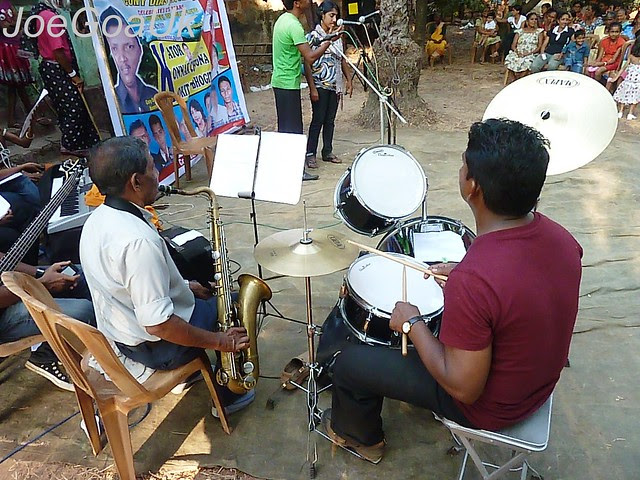 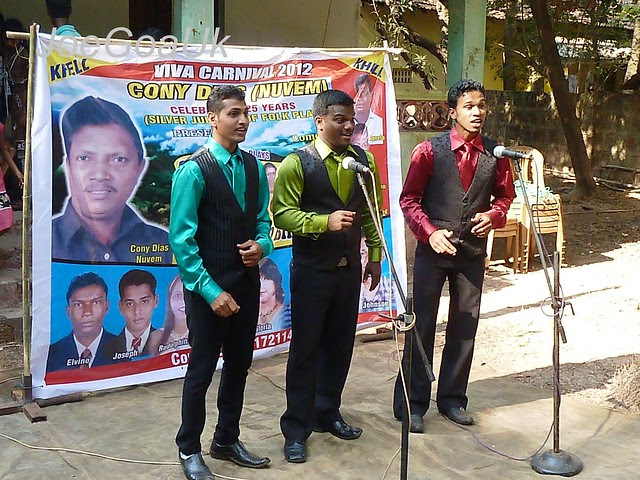 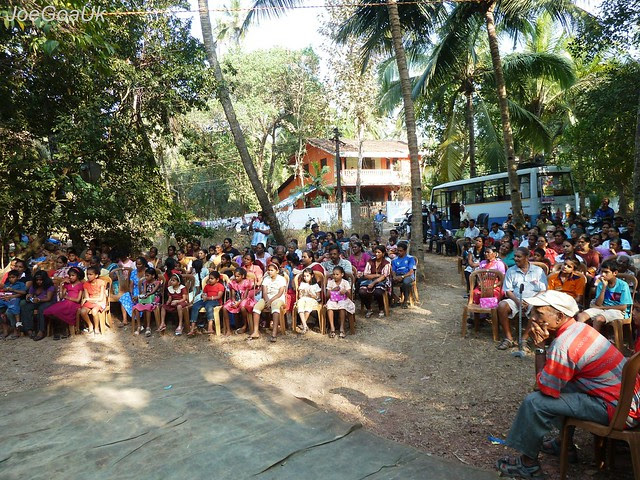 Toddy taper and his girlfriend
http://www.flickr.com/photos/joegoauk50/6905991041/in/photostream/

SORRY,  CARNIVAL CELEBRATIONS  CANCELLED
DUE TO THE MAJOR TRAGEDY AT ALDONA

Bus plunged into the river, at least 7 dead including school kids
Check this video (from Archive)
A bus and  the ferry ramp is shown, where ill-fated bus  straight went into the river where there was no ferry docked at the time.


Some local sources say, the bus break failed while trying to negotiating turn


Of the dead, there were two sisters, their mother picked them up from the school and put them on the bus and left to pick up  her son.

video from archive - The Ramp is seen

http://www.youtube.com/watch?v=04cRQscIL4M
Or visit this blog just created (with the victim pics etc)
http://joegoauk-pointofview.blogspot.in/2012/02/carona-calvim-aldona-bus-tragedy.html


Lord, take them into your arms


In view of above tragedy, Goa government cancelled Panjim Carnival announcement of which  was made around  4.15pm


Other pics (from archive)  of the Carona – Calvim. Aldona Ferry
in this pic, the ramp is seen on the other side 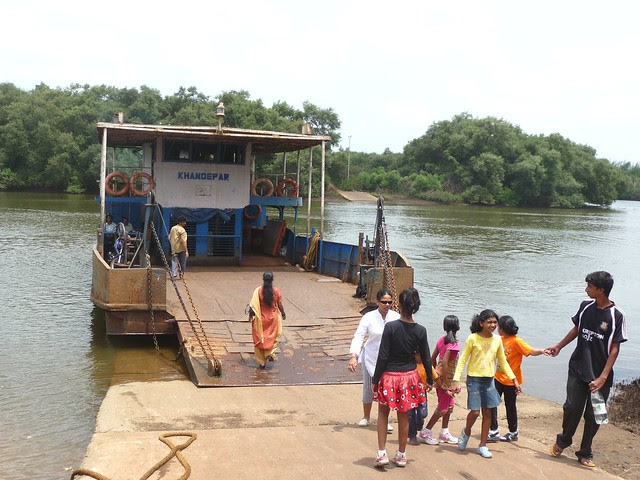 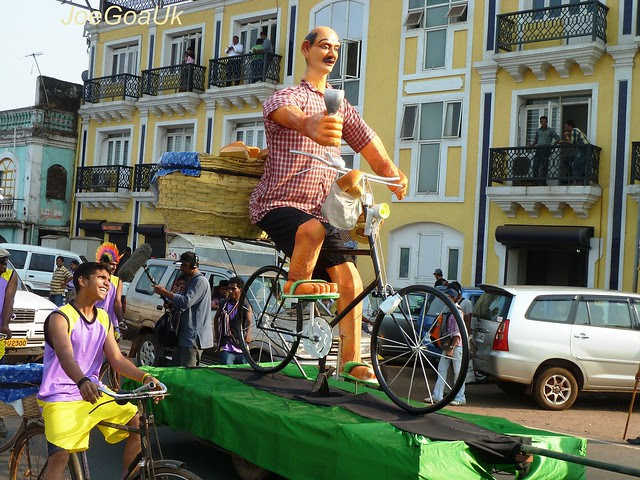 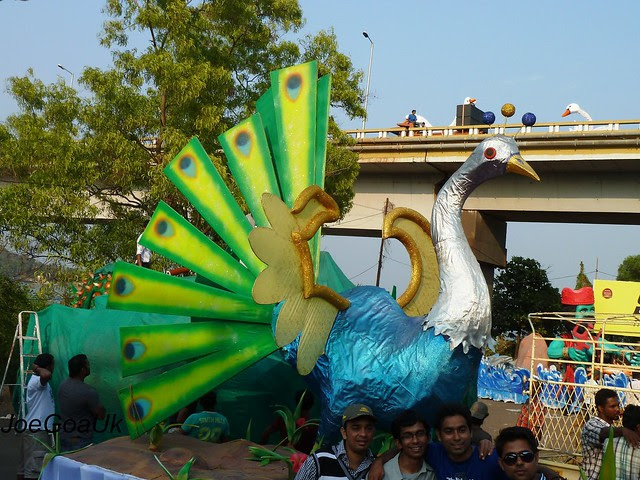 
Video - Some bits and pieces from the carnival parade streets 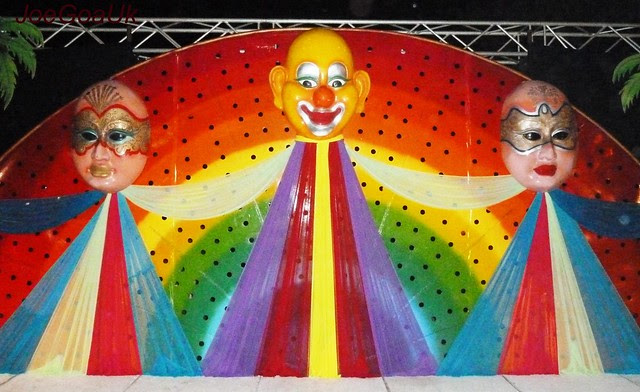 Last year, preparation sbegins a week in advance but this year due to  Elections Model Code Confusion, it started just 4 days in advance  i.e. from 15th Feb. 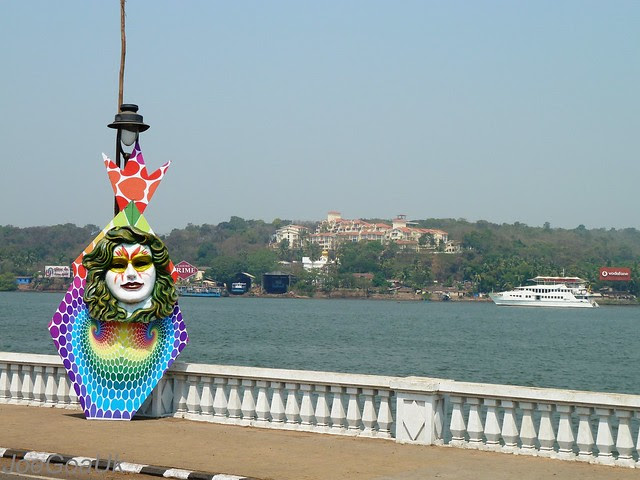 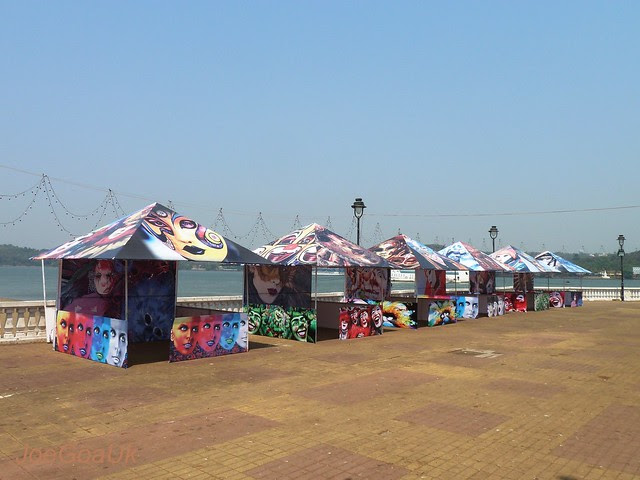 Following are some pics and video of the Parade streets, Carnival progame stage and Herald’s Carnival village 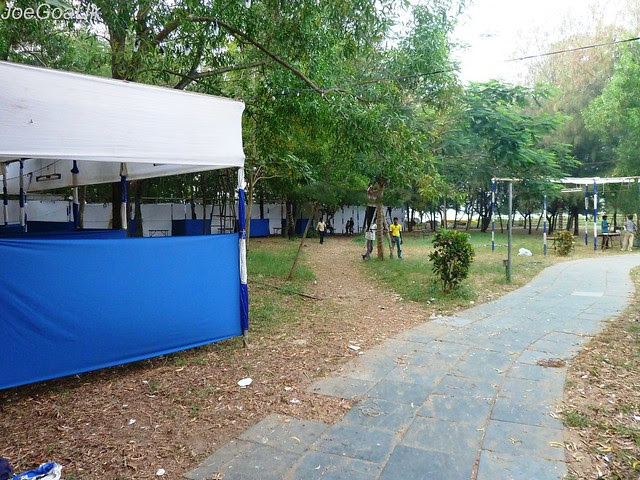 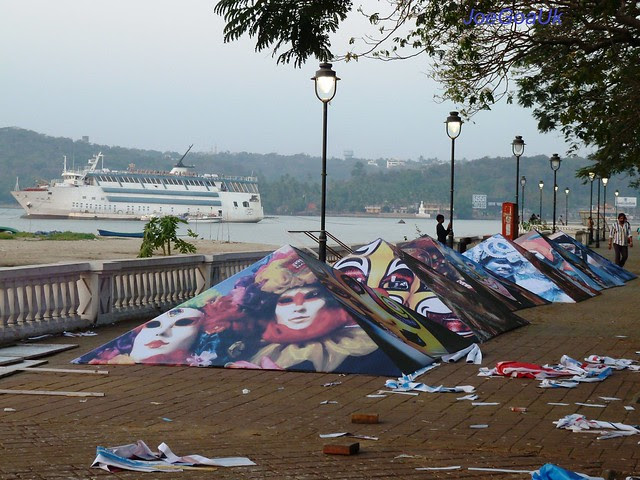 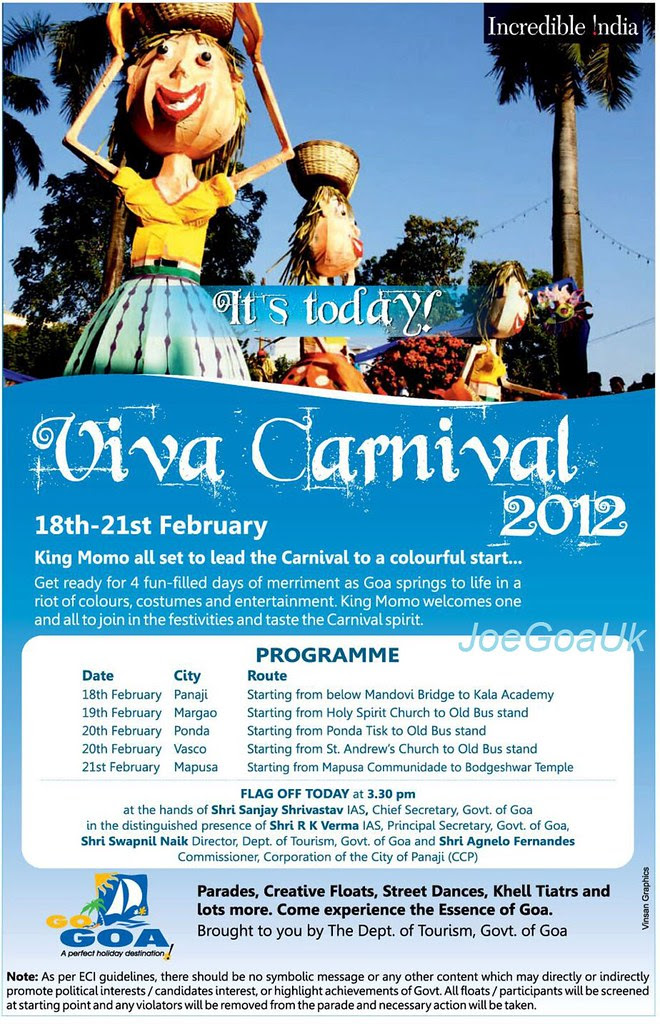 
Another Video Clip - Preview, 3 hours before the floats start

http://www.youtube.com/watch?v=i00IbXtChWY
Posted by JoeGoaUk at 02:54 2 comments: Links to this post 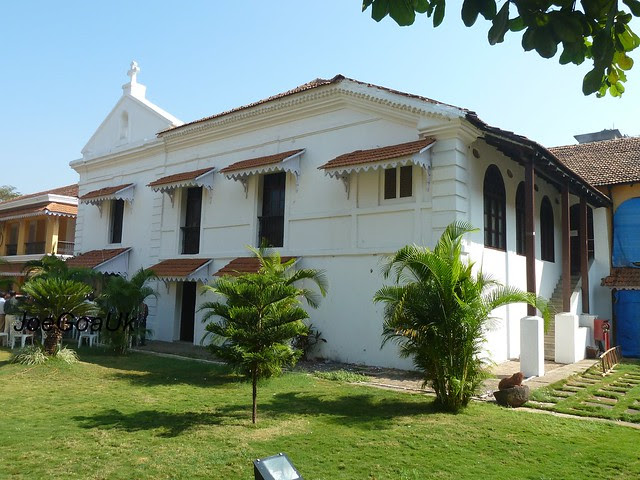 
18th century chapel which was built in 1720 and dedicated to Nossa Senhora das Doris (Our Lady of Sorrows).
It was a private chapel of the Maquinez Palace. Subsequently, in1781 the chapel was repaired and re-constructed and dedicated to Nossa Senhora de Victoria (Our Lady of Victory).
The chapel houses an 18th century exquisitely decorated teak wood altar with gilded work dedicated to Christ.
The feast celebrated today the 12th February 2012.
Feast mass was at 9.30 and the main celebrant Fr. Albano Fernandes

During the mass, Doctor's stethoscopes were blessed which is a customary feature here on the feast day (as old Goa Medical College was located here before shifting to Bambolim) 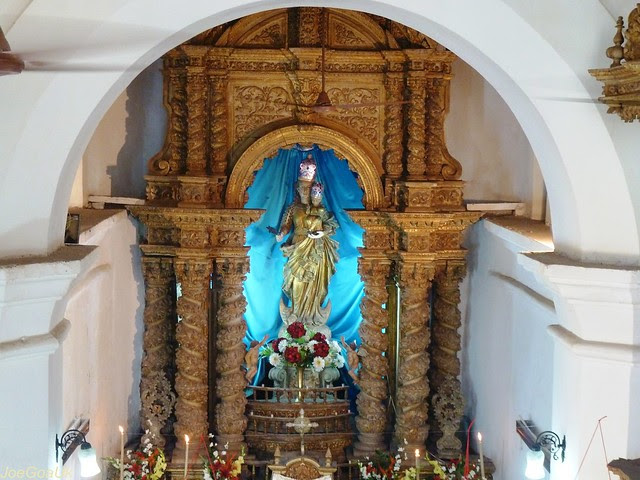 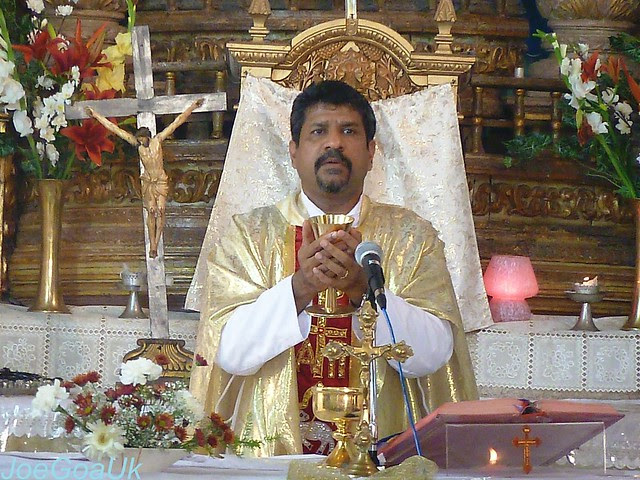 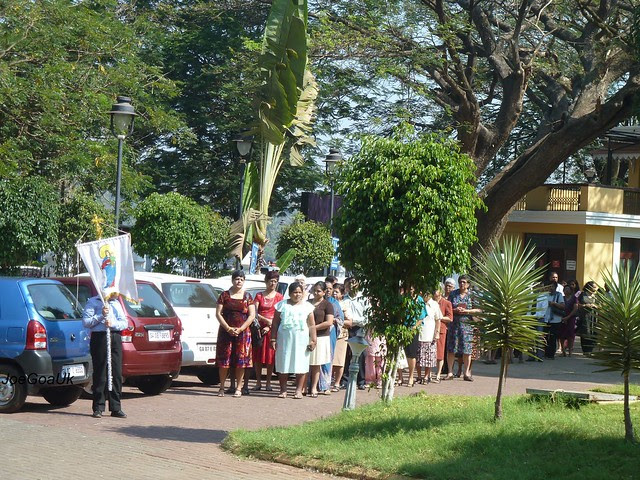 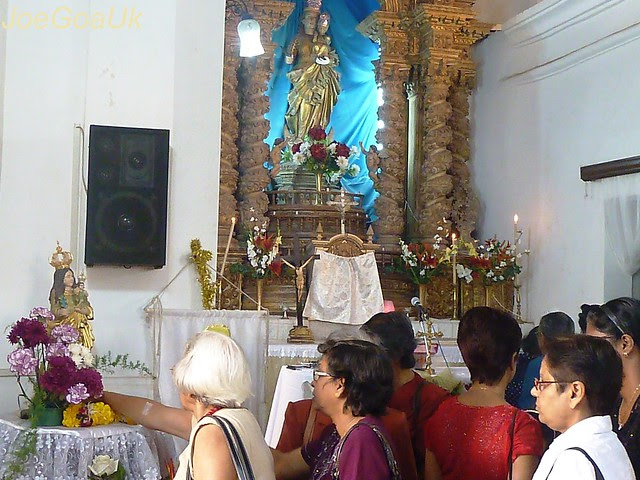 altar in the sacristy
http://www.flickr.com/photos/joegoaukchurches/4161761744/in/photostream/ 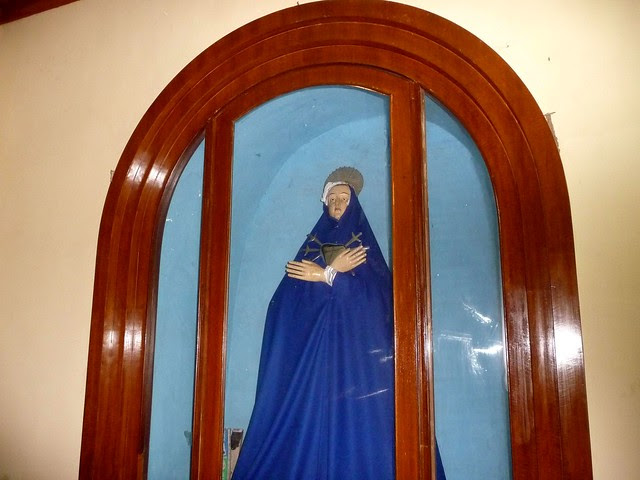 Our lady of seven dollors
http://www.flickr.com/photos/joegoaukchurches/4161763392/in/photostream/ 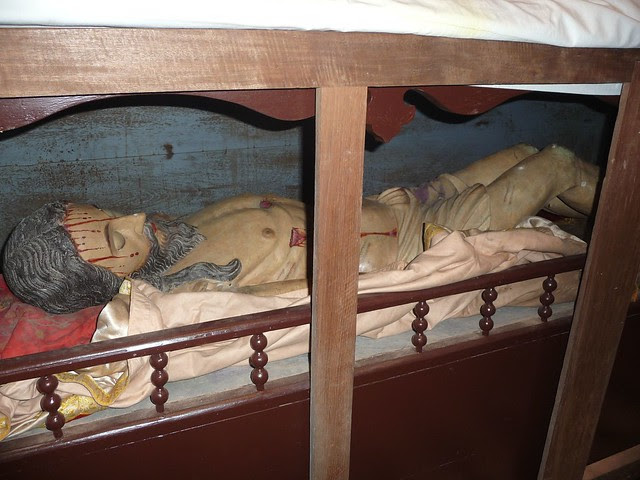 The city of Panaji had beautiful buildings built by the Portuguese aristocracy and well to do Goans. Some of them were called ‘palacio’ for their grandeur in structure and beauty.
One of these was the Palacio de Maquinezes. The Palacio de Maquinezes belonged to the brothers, squadron leader Diogo da Costa Ataide e Teive and Cristovao da Costa Ataide e Teive, who had the title of Conde de Maquinezes. As was the tradition in Goa, houses had their own prayer rooms with ‘oratorio’, a small altar, and some religious panels. Well to do have chapels attached to their houses where they could engage in religious practice having daily masses and a few families had exclusive chaplains to conduct the services.
The Maquinezes built the palace in the 18th century with a chapel dedicated to Nossa Senhora das Dores (Our Lady of Dolores). A chaplain was attached to the chapel and he had to say daily masses at the request of Francisco da Costa Ataide, who was addressed as Fidalgo da Casa Real and Cavalheiro da Ordem de Cristo, and lived in the palace. A daily mass was sanctioned by an order dated March 16, 1780. Father Martinho Barbosa from Panaji was its chaplain and the residence of the chaplains used to be above the chapel of Our Lady of Dolores. In 1784 it was repaired and restructured.
When the government decided to transfer the Military Hospital from Panelim to Panaji, they decided to house the hospital and start the medical education from this palace where the Escola Medico-Cirurgica de Nova Goa was established. The Military Hospital had a chapel attached to the institution which was founded in 1715 by Jose da Silva Gouveia and they also decided to transfer the chapel to Panaji. This was done by constructing a chapel attached to the existing chapel of the Maquinezes. The construction was done in such a way that the common wall between the two is concealed and it looks like one chapel.
The chapel was dedicated to Nossa Senhora de Vitoria (Our Lady of Victory). The statue of Our Lady was brought from the House of Cathecumens at Betim in the same year. The altar is in baroque style and has the imposing statue of Our Lady in the centre. There is also a baroque style pulpit, which in olden days was used to deliver sermons by the priests. Today the pulpit is in disuse and the door to the pulpit has been cemented. The chapel also has a wooden choir stand which is supported by a carved wooden beam.
The altar of the first chapel of Our Lady of Dolores, which is positioned behind the main altar of Our Lady of Victory, is today used as sacristy and connected by a door. In this chapel is a teak wood altar dedicated to the crucifixion of Christ. It is exquisitely decorated with guilt work and belongs to the early 18th century. There are five niches around the altar in which are placed the statues of Our Lady of Dolores, Our Lady of Health, St Joaquim and two statues of St Gabriel. Six episodes in the life of Christ are depicted on the inner sides of the shutters: The condemnation, Pilate washing hands, Christ being flogged, Christ crowned with thorns, the crucifixion and Christ resurrected. There are also another two statues, one of Our Lady of Rosary and that of Our Lady of Immaculate Conception. There was a door to the chapel that led to the road, which is now closed.
It would be interesting to know that in 1573 Pope Gregory XIII instituted ‘Our lady of Victory’ as an annual feast to commemorate the victory of Lepanto. The victory was attributed to Our Lady as a rosary procession was offered on that day at St Peter square in Rome for the success of the mission of the Holy League to hold back Muslim forces from overrunning western Europe. This feast was extended by Clement XII to the Universal Church. Following the reforms of the second Vatican Council the feast was renamed Our Lady of Rosary. The feast has the liturgical rank of universal memorial and is still celebrated on the anniversary of the battle on October 7. In thanksgiving for the victory of the Battle of Muret, de Montfert built the first shrine dedicated to Our Lady of Victory. However, much before, since August 14, 1385, the Portuguese Armed Forces had proclaimed Our Lady of Victory as the Patroness. This was done as on this day a small Portuguese army defeated a larger invading Castilian force.
The chapels saw the splendour and greatness during the Portuguese regime, when nobiliarchy and people of all walks of life attended the services and the feast of Our Lady of Victoria. Before 1961, and soon after, the grandeur of the feast was maintained by the staff of the Escola Medica Cirurgica de Goa and of the hospital.
On the feast day, there used to be three masses. Besides the High Mass, the second Mass was also solemn, with the Patriarch attending and participating in the service. At this mass the stethoscope of the finalists of the Medical College, were blessed by the Patriarch. Dignitaries and important persons were present at the High Mass.
The procession started from the chapel, winding through the roads up to the entrance of the main building of the hospital. Inside there, prayers were said, before the devotees were given blessings of Our Lady. Here patients would also participate in the service.
This year the feast will be celebrated on February 12, with two masses in the morning at 7.30 a.m. and 9.30 a.m. Let us hope that the doctors, nurses and staff of the Escola Medica and later Medical College and hospital will attend the services to bring back the grandeur of the past and make this a nostalgic reunion. Some years back the chapel has been transferred to the Archdiocese of Goa
Posted by JoeGoaUk at 14:06 No comments: Links to this post