After the feast high mass, the kings make their journey downward which started at 12.30 noon and reaching at Cansaulim Church square at 2.10.   Inbetween the 1.5hr of journey, the king entourage makes 7 stops (Traditional halting stations) where crowns of the kings taken off and briefly touched to the peoples heads as if making them also a king for a split second.
People going here would say 'Hanv Krov gallunk voitam'
They also kiss the large Crosses chained around the kings necks. Kings usually hold the cross  in their hand (watch video)
First such stop is at the foothill at Cuelim, second station about 350 mtrs away. Passing through the fields, then come the 3rd Halt at Xendo fields.  The entourage then comes off the field and takes the road towards Cuelim- Borsulem but at the pond or lake it takes right to reach 'Goykars' house next to T B Cunha ancestors House (both houses shown in the Video). At this halt, traditionally, pez or Kanji was served to all but now just a soft drink to the King and his people.  It then passes through the 'Pandd'  hollow passage way to come out again on to the main road  towards Cuelim - Cansaulim Church Road. Near Late Alberto Cunha House (shown in the video) but on the main road is the 5th Station.  Immediately, say about 100 (or less)  mtrs away comes the 6th Station infront of 'Regidor' House. I guess this halt was introduced  to honour the then Regidor during Portuguese time. 'Regidor' could mean a collector or administrator of Municipality.
Following the same road comes the  7th Station at Barca  where Kings come off  the horse backs and rest on a bench or sofa. At this place horses are also given some refreshment (Horses are hired from Belgaum, Kolhapur etc).  8th station is at in front of the St. Thomas Church.
Earlier, (before 90s) only two kings came here now all 3
The horses/kings  lined up facing the Church (see pics).
Here they will sing 'Laudate' and a sort of flag / Bonderam waving act at the Church Main door.
Each king entourage has its own large flag - see pic/ video. They also had large colourful umbrellas
3 times larger than what you see in the video.
From here, the Cuelim King and his entourage take different way out / route and the remaining kings will follow the main Cansaulim road  upto to say Market  from where they go their own but traditional ways or route  to reach their  homes or destination i.e. Cansaulim and Arossim.
Last king of Arossim could reach home  around 3pm. (he must have started his journey say 8 in the morning to be up there right on time for feast high mass at 10 or 10.30.)
Please note the kings have their 3 different paths or trails to reach the hill top. However, when coming down they will follow another common trail as shown in the video in the beginning. All these 3+1 trails are called 'Paz' or 'Reyamchi Paz' (Kings route or trail)
The entire traditional route from Chapel to the Church could be about  7 kms , add  4-5 Kms more upto Arossim.


Each King entourage has its own brass band and they will play in turns to keep up with the continuity as can be seen in the video. 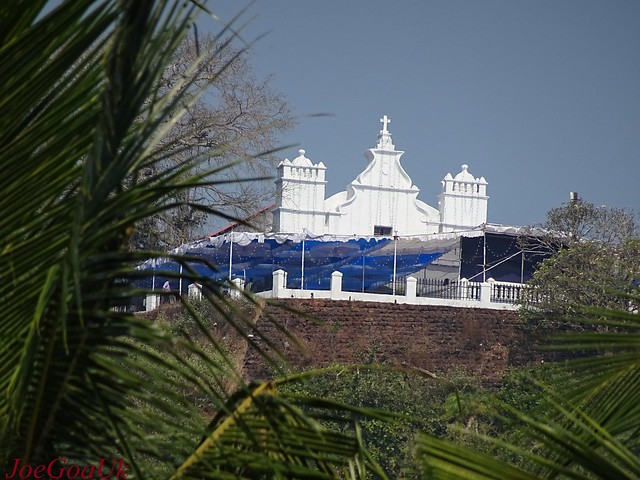 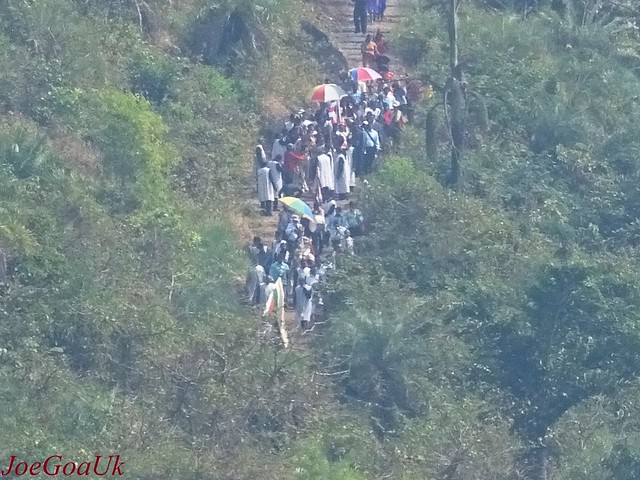 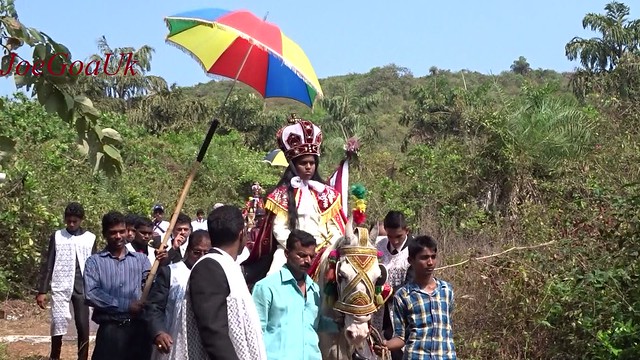 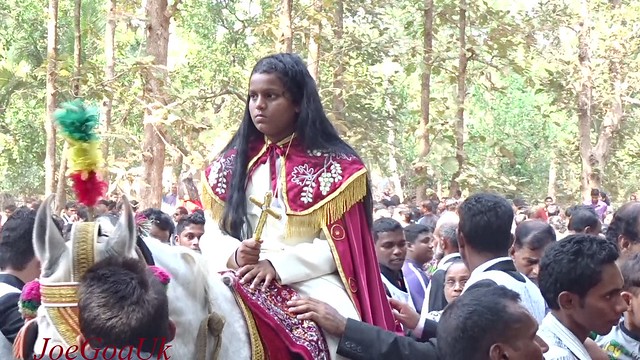 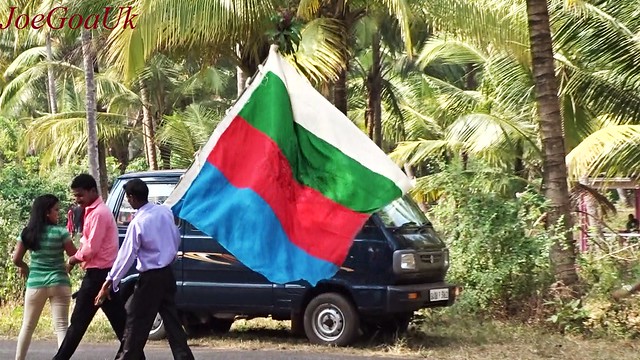 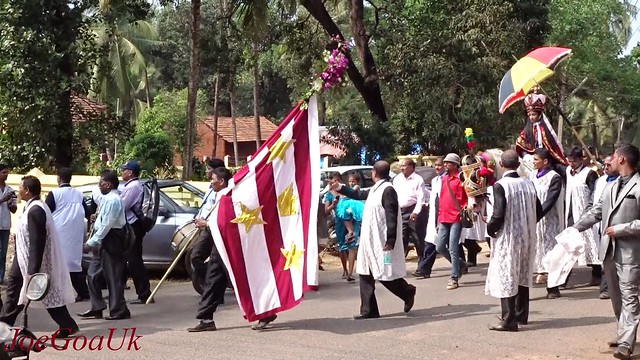 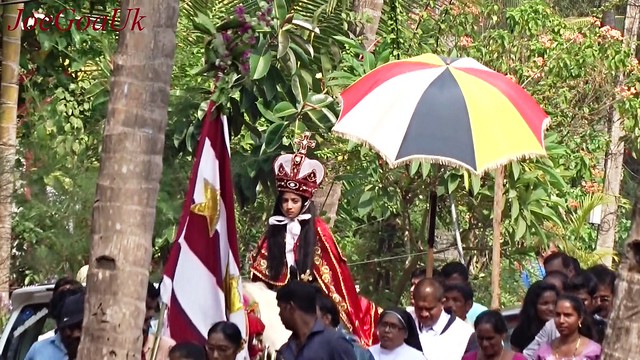 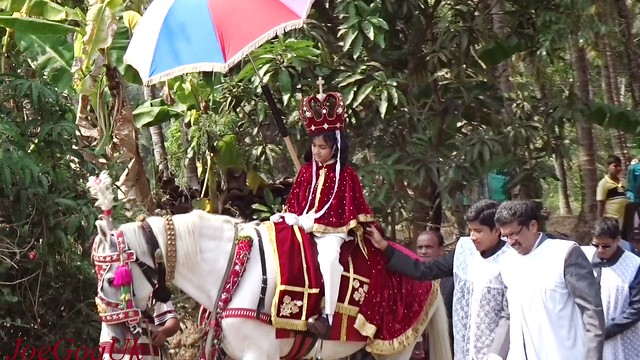 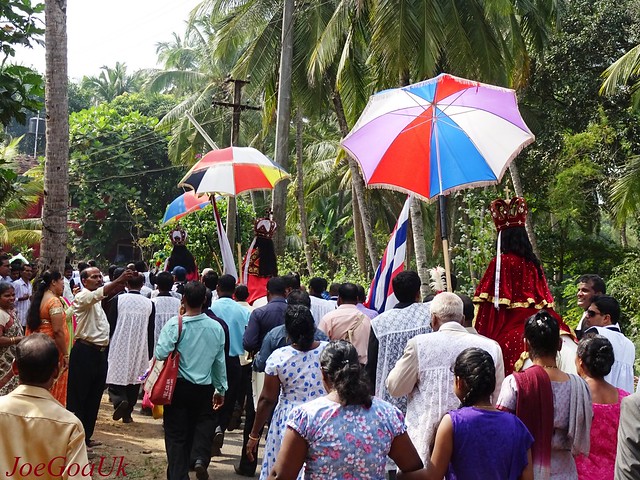 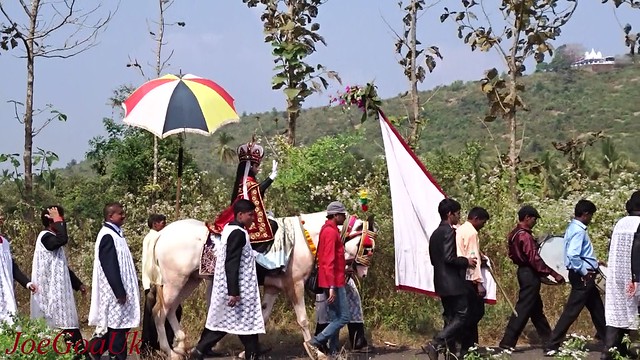 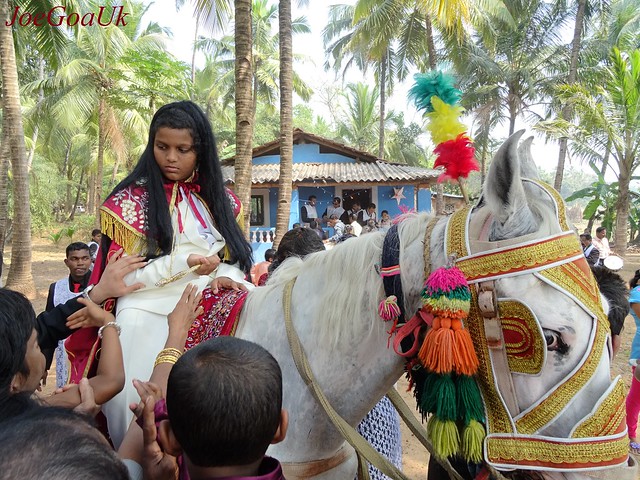 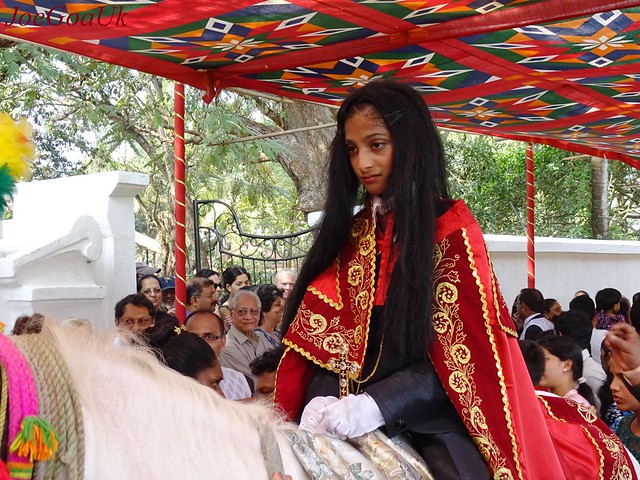 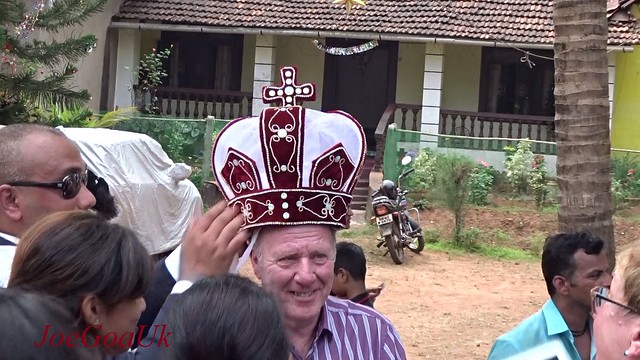 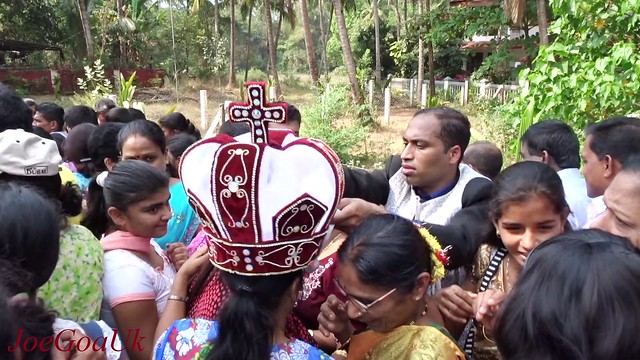 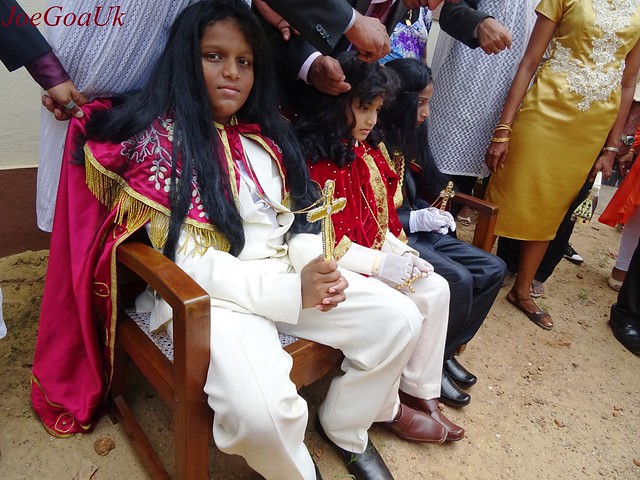 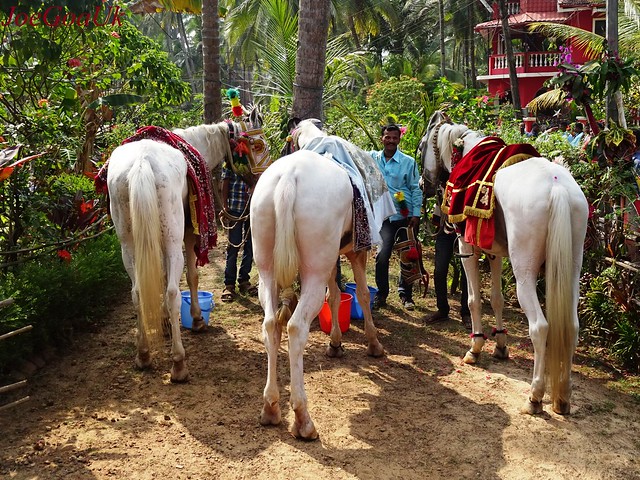 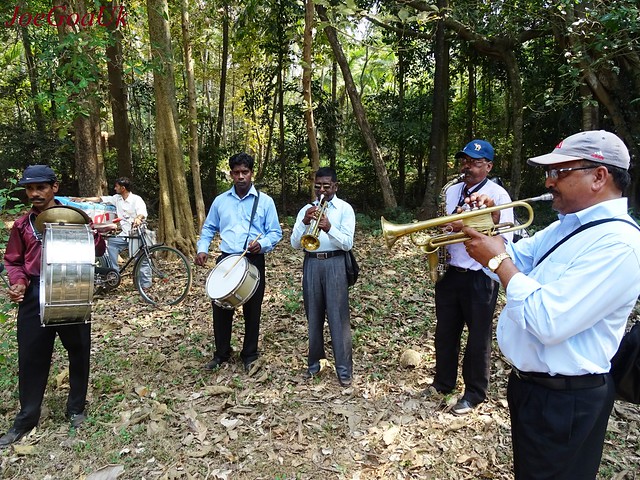 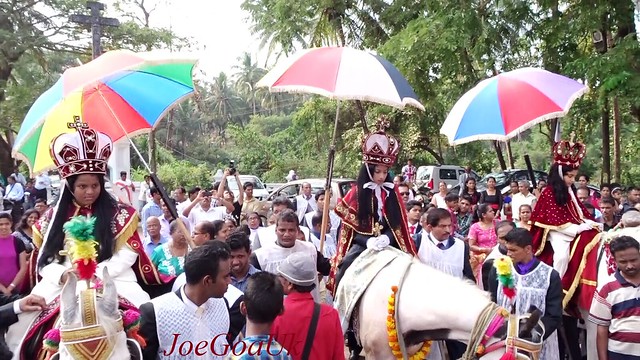 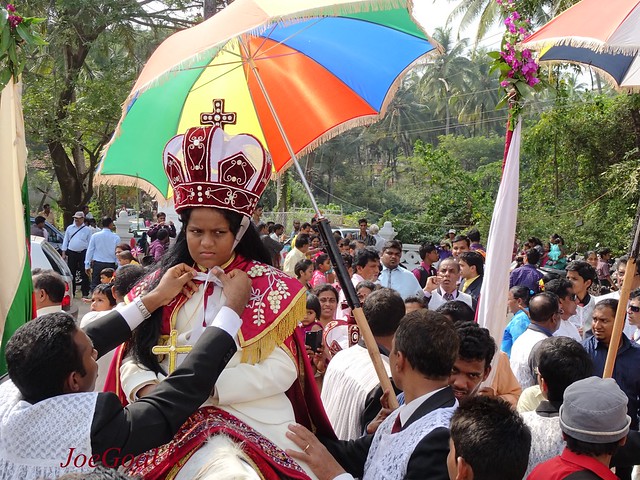 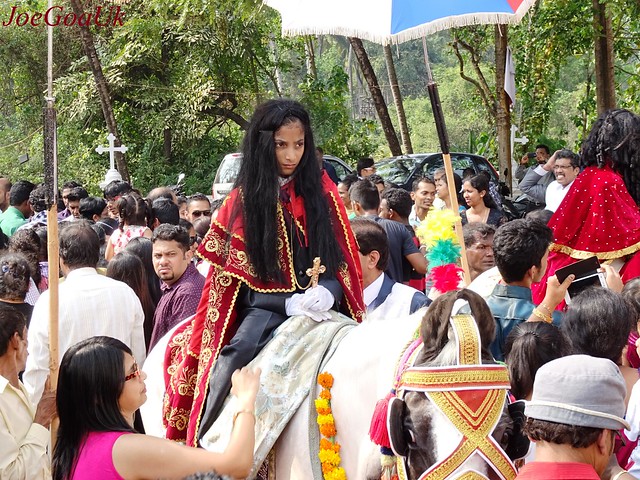 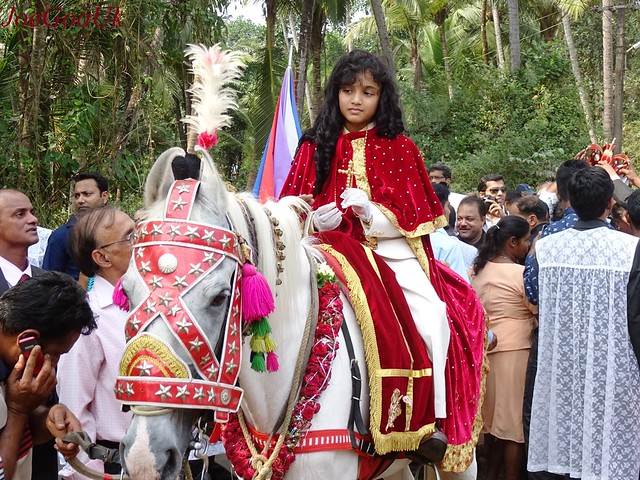 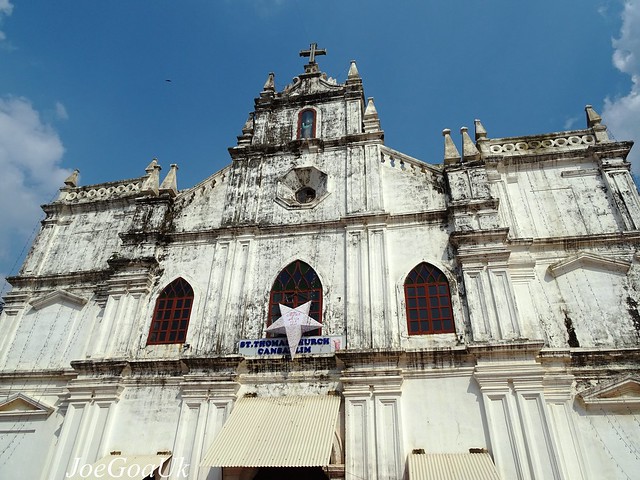 some development in the yard – stone plate
https://www.flickr.com/photos/joegoauk66/16213506412/in/photostream/